My first attempt at a video poem.

A numbness fills this earthly shell
As darkness fills my mind
My eyes are open wide and yet
These mortal orbs are blind
A distant rhythm, soft and slow
Its echoes gliding past
The future slowly fades into
Old memories that don’t last
The fading but persistent beat
Not easily ignored
Attempts to bind pure thought inside
This shell that never soared
The echoes slowly fade away
Forgotten for a time
The silence settles like a shroud
As chains of thought unwind
A key turns in a hidden lock
A darkness shrouded door
Now opens bleeding golden light
The shadow starts to soar
Then suddenly that distant beat
The pile of dust it calls
A shadow beckoned back to pain
And walking dusty halls

(Pulvis et umbra sumus - We are but dust and a shadow)

Email ThisBlogThis!Share to TwitterShare to FacebookShare to Pinterest
Labels: Apocalypse and Beyond, Phil Gibson, poetry

Here is a poem I wrote many years ago in the early 90's exploring how easy it is for so-called 'civilised' society to slip into savagery. After watching the news all evening and following #londonriots on Twitter I think I should rename this piece 'Savage in a Hoodie' instead, although these mongrels are not fighting for survival, they are 'fighting' for Nikes and plasma tv's!

Some people consider my poems to be too dark, morbid even. Maybe they are but I only tell it as I see it. I see nothing to be gained by sugar coating the truth, even when it is a painful truth. When you add it all up; the financial crisis, the food crisis, the climate crisis, the water crisis, the energy crisis, the resource crisis, the population crisis - is the world not a dark and morbid place? Still, no need to get depressed about it. I'm still an optimist, even though I know awful things are going to happen...

Some-times it really sucks to be right...

Savage in a Suit

We’re just a couple of meals away
From anarchy, so experts say
I’m sure you doubt this can be true
So I’ll try to enlighten you

The things you take for granted now
They are no longer there somehow
No petrol for your fancy car
Well, am I getting through so far?

But things will go from bad to worse
With worthless money in your purse
No matter, there’s no food to buy
And anyway, the end is nigh

Soon shortages will start to bite
Out on the streets the people fight
For any food that does arrive
Remember, they have to survive

Countless starving millions dying
On the streets the corpses lying
And those unlucky ones alive
With only one thought, to survive

Could you survive this brave new world
When anarchy's flag is unfurled?
Or would you just curl up and die
Cowering as your children cry?

As a special thank you to my growing list of Twitter supporters I have issued a 30% off coupon for my anthology of dark poetry, Apocalyptic Visions, available from Smashwords.com as a multi-format ebook. Any-one wishing to take advantage of this offer need only click HERE and then enter the code when prompted.

For any-one unfamiliar with my work you can read some sample poems from the links below:

Once again, thank you to all tweeps who have commented, mentioned, RT'd amd otherwise tweeted their support.
Posted by phil at 23:08 0 comments

Two eyes, a flickered movement
As a new life is unfurled
But the wonder of this moment
Is just wasted on this world 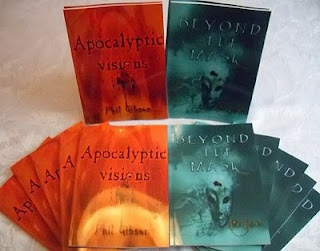