But this year will you spare a thought
For all the poor children with nought?
Or will you just repeat last year
And lose yourself in Christmas Cheer?

A Letter to Santa

A New Catastrophism for a New Era 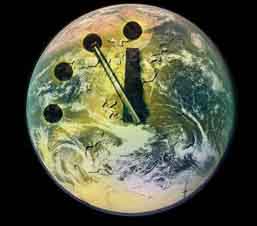 During the 1930s a small group of Polish poets, associated with Czeslaw Milosz, became known as the Catastrophist school of poets. Aleksander Fiut explained in World Literature Today –

"the inevitable annihilation of the highest values, especially the values essential to a given cultural system. . . . But it proclaims . . . only the annihilation of certain values, not values in general, and the destruction of a certain historical formation, but not of all mankind,"

"political catastrophe has defined the nature of our . . . [age], and the result—the collision of personal and public realms—has produced a new kind of writer. Czeslaw Milosz is the perfect example. In exile from a world which no longer exists,... , Milosz deals in his poetry with the central issues of our time: the impact of history upon moral being, the search for ways to survive spiritual ruin in a ruined world."

The "central issues" of the time of the Catastrophist poets were the political and philosophical upheavals leading up to the outbreak of the Second World War and the writings of this group of poets ominously foreshadowed the horrors of that conflict. The world was dealing with the repercussions of the Great Depression - mass unemployment and social deprivation, the rise of extreme national political movements and authoritarian governments. The Catastrophist school of poetry was a reaction to a growing sense of global anxiety and fear for the future.

The central issues of our age are many and varied. We seem to be living in an age of crises - economic meldtdown, over population, climate change, water shortages, food shortages, peak oil and peak everything else, species extinction - the list just seems to keep growing...

During the Cold War we all lived with the constant threat of nuclear annihilation. The likelihood of the Mutually Assured Destruction of an all-out thermonuclear exchange may have subsided but many other potential catastrophes are waiting in the wings. A new antibiotic resistant superbug released by accident or by design could unleash a catastrophic pandemic to ravage the world population. Recent erratic oscillations of the global climate system could precipitate an abrupt climatic shift into a new northern hemisphere ice age or runaway global warming. UG99 black stem rust striking major wheat producing regions, extinction of the honey bee through Colony Collapse Disorder or the general increase in extreme weather events could cause a dramatic drop-off in global food production leading to mass starvation, famine and general chaos and anarchy. The current plateau of oil production could at any time begin the inexorable slide down the back slope of Hubbert’s Peak leading to an ever increasing shortfall between supply and demand in turn leading to global recession and poverty, falling food production and famine and increasing political unrest and resource wars. Then of course there are Nature’s wild cards - Mt Everest sized asteroids like the one that caused the extinction of the dinosaurs, super volcanoes like Mt Toba which took out 90% of the human population 70,000 years ago, Coronal Mass Ejections from our sun like the 1859 event which scientists believe was powerful enough to wipe out our satellite network and fry the global electricity grid plunging the world into a darkness from which we may never recover.

We are in a new era of Catastrophism.

‘The End of the World As We Know It’ does not have to mean the end of us as a species. We are living in a house of cards. If you take out a card, whether that be the oil card, the food card, the electricity card or the economy card, the result is likely to be the same. The whole precarious construct will come crashing down around us and the survivors will wake to a very different world.

The planet does NOT need saving, it has taken care of itself for billions of years and will continue to long after we fade into history.

What we need to save is us... from ourselves.

The only question is; do we deserve it...?

Thank you for your support

I would just like to say a big thank you to every-one who supported my FreeBook Promotion over the weekend to celebrate the release of my new book, 'Apocalypse and Beyond...' in paperback edition from Lulu.com. Considering it was kind of on the spur of the moment I think it all went quite well, although I think I learned a few valuable lessons for when I repeat it in the New Year.

A special mention needs to be made for my twitter followers who added their support, in particular those who spread the word by retweeting or otherwise bringing the event to the attention of their followers;

Any-one who missed the promotion will have a second chance at a free copy of the book in the New Year when I intend to run another similar event. In the meantime my books are still available in Kindle format from Amazon and as paperbacks from Lulu. Also, 'Apocalypse and Beyond...' is enrolled in the Kindle Owners Lending Library which means Amazon Prime Members can download a copy for FREE for upto a month at any time.

To celebrate the release of my new paperback, 'Apocalypse and Beyond...' I have arranged a special promotion for the Amazon Kindle Edition.

If you prefer your books on paper then you can pick up a copy of 'Apocalypse and Beyond...' in paperback from Lulu.com at an introductory discount of 20% for a limited time only.

"If I may put forward a slice of personal philosophy, I feel that man has ruled this world as a stumbling demented child-king long enough!"

- Vincent Price Monologue (Welcome to my Nightmare by Alice Cooper)


As I stated in my earlier post, the Soapbox is to be just that, a soapbox from which I can air my personal opinions. I have strong opinions on a number of subjects and I am increasingly finding myself in need of an opportunity to vent. For any-one who has been following my blog and reading my poetry, the general slant of my views should be fairly apparent from reading poems such as A Painful Truth, Mice or Men or Morbidity.

Over the years many people have commented on the morbid nature of my poetry. I have been criticised for having a bleak outlook and my poetry has been described as a 'work of darkness with occassional patches of gloomy shadows'. My response was in the form of a poem - 'Morbid, Who Me?' I will post this poem next as I think it states my case quite succinctly.


There is a question
I have been asked
now so many times;
I’m always asked
why do I have to
write depressing rhymes?

These people say
that I should write
of pleasant happy things,
Describing pretty
flowers and
the way the songbird sings.

They ask me why
I cannot write
of love and peace and joy,
Portraying laughing
children playing
with a favourite toy.

They say that I
should tell of all
the beauty of this land,
I try to give
my answer but
they do not understand.

The reason is
so clear to me,
why can’t they realise?
I cannot write
these things for then
I would be telling lies.

The sad fact is
this world is full
of hatred, war and pain,
A world in which
the children are
locked up and go insane.

They dug up all
the flowers, shot
the birds out of the sky,
I cannot write
of beauty as
I watch that beauty die.

Over the past week I have been renovating The Garret. Although I have managed this without taking the site down completely I am aware this may have caused some disruption to access so apologies to any-one experiencing any difficulties accessing certain pages.

In an effort to improve the functionality of the site I have tidied up the navigation and improved and updated the Books page. You will notice two new tabs have appeared to replace some of the superfluous ones. The Bookstore is a fully functioning portal to browse and/or purchase my books and those that have inspired and informed me over the years.

The Soapbox is intended to be an extended 'ED OP' page, a place for me to express my view of current events. Any-one reading the content should be aware that any opinions expressed are entirely my own and I make no apology for them.